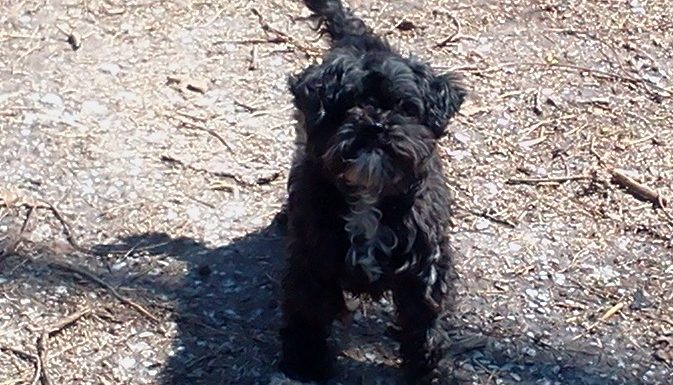 You are here: Home / Blog / True Stories: The Miracle of Mellie

So this is the story of how we found Mellie, our little dog.

Read on, I promise you will see God’s unmistakable sovereignty woven into this whole sad, happy, crazy story. It’s a little long, but it’s one of my favorite stories. God’s presence was so evident throughout, and I promise… there’s a happy ending. 🙂

The story actually starts on July 12, 2012, three days before I married Vince. I lost my little 19 year old dog Maggie, who was blind and deaf. But she didn’t die of old age–she was hit by a car when she wandered in the dark. I was absolutely traumatized and a mess. And I was already very nervous about getting married! But the story gets better, because God, as is His habit, used this experience to make His presence very evident.

I called Vince as soon as I lost Maggie in the dark, and it was he who took care of everything I wasn’t able to do. I cried, overcome with guilt. I was a disaster! But after Vince let me cry it out, his first words were, “but look at God’s sovereignty.” What did he mean by that?? I couldn’t see it. My dog had died because I’d lost her in the dark. “Well,” he continued, “You know how she’d quit yelping when she was hurt? You could step on her foot and, because she was deaf, she didn’t even cry out.” We went on to discuss her growing arthritis, and how she’d probably been in more pain than we realized. “Maybe this was God’s way of taking the decision out of our hands, cause He knows more than we do.”

Oh. Yeah, that could be.

Blessing one from God–solidifying that I was, in fact, marrying the right person. That I was entrusting myself to a godly man who would recognize God and look for His sovereignty in everything. WONDERFUL. I walked confidently down the aisle three days later toward this man, and felt God behind the whole thing. And God again showed His presence through my good friend Sharon, who showed up to help for the wedding and instead let me sob on her shoulder. (We always manage to be there for these things, don’t we Sharon?) 🙂

Six months later, then down to just the one dog, we had no plans to replace Maggie. Until Milo, other dog, decided he couldn’t take being alone every day, and tore out of his cage (and almost through a solid metal front door). OH! Ok, maybe another dog is a good idea. But a sweet little one, like Maggie. One to sit on my lap.

I shopped for a few months, but every sweet and little dog was snapped up from the shelters almost as soon as they became available. Finally, I found a cute 35 pound male mutt named Scruffy. Very cute and animated. I was worried about how hyper he was, since we already had a hyper dog, but no other dog seemed to work out. My name was first on the list, and we got him! But the night before I was supposed to formally adopt, I got a nudge from God. No. Just wait. “But God, you don’t get it! Do you have any idea how hard it is to find a small, sweet dog?” Yeah, He probably did.

In fact…  He’d already FOUND that dog. (Not that I had any idea at the time!) I sadly turned down Scruffy and went on looking. The next day, I walked into a little shelter of yippy little dogs and almost walked out when they said, oh! There’s one more back here. I walked back to see an 8 pound black poodle mix with a puppy face, soulful eyes, and a sweet tail wag. She was perfect! I knew instantly this was the dog I’d been looking for. I didn’t even have to ask if there were other names ahead of mine, how old she was, or any details. I knew God had wanted me to wait for this dog.

A week later, Amelia came home with us. We called her Mellie for short. Nothing like the hyper dog I’d almost settled for, Mellie spent hours curled into the curve of my chair-bound grandfather’s arm as he struggled with cancer.

She followed me quietly around the house. She became Vince’s little princess.

Best of all, Milo took to her instantly. One look and he seemed to say, “Oh! There’s the sister I’ve been missing.” He knows how to roll over on his back and let her win the wrestling matches. (which is good, with his 50 pounds to her 8.)

And the final “God” moment….  when I got this little girl in January, I asked how long she’d been at the shelter. I assumed I’d hear “less than 24 hours” or something similar. But nope. They said, “Since July 12!”

How amazing is our God?