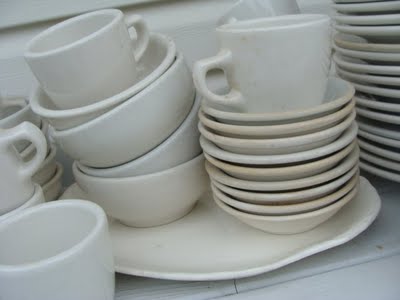 You are here: Home / Blog / Breaking My New Covenant – The Dishes Story

So my husband and I had an agreement. It seemed fair to me. He does the cooking, being that he’s far better at it than I am, and I do the dishes. I mean, what’s a Norwegian’s cooking compared to that of an Italian? Plus, he is home two hours before me every night.

We started this agreement about a week ago, after spending the first weeks of marriage wondering who would cook that night. We both thought the other would. How does everyone else handle dinner? Is it always even? Or does one person cook? And does the arrangement work?

Well, our arrangement worked. Once. That’s right… we had one day of this agreement actually being fulfilled. Vince cooked dinner, I did the dishes. Then the next day, Vince cooked dinner and the dishes got partially done…  then the dishes were forgotten after that. (By me, at least.) I try to remember, but then I get absorbed in writing my book, or some project has captured my attention.

But guess what. It didn’t stop Vince from cooking for me. Every night when I get home, there’s rice in the rice maker or fish on the stove. There’s a box of fresh tomatoes and veggies from our garden and Vince is chopping them up for dinner. And he probably knows that I’ll forget the dishes again, but he’s still making dinner.

I seem to remember a group of people that acted a bit like me – the Israelites. Not the best people group to resemble, but I sure do. God always keeps His end of the covenant, even when He knew they wouldn’t be upholding their end. They probably had good intentions, had a desire to protect their family and businesses, but when it came down to it, they were just flat unfaithful to God.

Last night, I think, was the peak of the dishes and dinner issue. I made cupcakes for ladies at work. I finished after 9pm and was desperate for my writing time before the evening was over. Even though I’d made a covenant to do our dishes – and I should especially do MY dishes – I had other plans. Other priorities. I told myself I was just “taking a break” and would come back in a few minutes, but before long, much time had passed and I heard the clink of dishes in the sink.

My heart fell. I’d forgotten. Again. I ran in to help, but Vince was almost done.

Tonight when I came home, Vince was cooking. The dishes were already done. I walked over and kissed my husband, giving him an extra squeeze. He looked down at me with a sweet smile and kissed my head. Regardless of how badly I did with keeping my end of the agreement, Vince kept his side (and sometimes mine as well).

No, I won’t. Because right now, I have dishes to do.