I’m hosting a study of the vineyard research I did in A Rumored Fortune, because of the rich Biblical depth of understanding these crops, and I’d like to share with you all the material I’m posting in the group. Along with video discussions, this is what I’m pouring from my heart in the hopes that it brings the same life to readers that it brought to me.

Please feel free to join the group if this resonates with you–we’re running through the month of April. Jump in any time. Link to the group here: https://www.facebook.com/groups/goingdeeper.vineyards/

My son came barreling into the world two weeks early, ready to get started with life. He’s pretty much been that way ever since. He’s an intense burst of fun, intelligence, curiosity, and wreaking havoc. From day one, I felt like a tornado had swept through my house.

And that became the atmosphere that birthed my vineyard novel. I received word on the story topic and due date the very week my little tornado was born. Before this, I thought I had parenting pretty much under control—writing, too. Most of life, in fact. I’d just put out my first novel. My first child, a little girl, was sweet tempered and easy-going. Then in the same week in August 2016, my second child and my second book began their lives.

As did an unexpected post-partum depression. I felt isolated. Tired. Completely uncreative and mentally flat. It was more than being a busy young mom and a new writer—this season brought to the surface a years-long soul-thirst I had never been able to quench, one I often pretended wasn’t there. It had been there for a long time, like a white noise that you can mostly ignore but never really turn off completely.

I hadn’t had to face it head-on, because life was manageable for me. I was holding it together.

Until I wasn’t. I couldn’t.

This desert was a reflection of another even deeper one that had happened years earlier—one that was life-and-death intense for years. (I’ll talk about that one later.) I strongly believe that deserts are a wonderful piece to life because only the thirsty seek water. Only the dried-up vine will be readjusted for a stronger, richer flow of nourishment. In both of those tough seasons, I wasn’t living well, and I reached the end of myself. The girl who could “handle anything” was out of strength.

And let me tell you, readers, that’s when the real strength began. I was knotted up inside, face-down on my living room floor begging God for help, and totally aware I was doing a horrible job at life. None of it was pretty.

But it was about to get beautiful.

“My soul will be satisfied as with fat and rich food,
and my mouth will praise you with joyful lips,
when I remember you upon my bed,
and meditate on you in the watches of the night;
for you have been my help,
and in the shadow of your wings I will sing for joy.

In a vineyard, the difference between success and failure, between a trickle of survival and abundant, flourishing crops, is a little section on the plant that’s about an inch big—it’s the joint between the branch and its vine. Bringing grapes to maturity and rich flavor is an art, and many variables have to be just right, but none of them matter if that connection is weak. 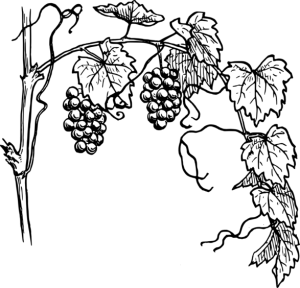 To start, let’s understand the symbolism Scripture uses regarding vineyards: “I am the true vine, and my Father is the gardener” (John 15:1). “I am the vine; you are the branches” (John 15:5a). The vine is Jesus. That’s the main “trunk” of the plant—you see that here all the way over to the left. The vinedresser, or the gardener who prunes and cares for the plant, is God. The branches shooting off from the vine are us. Then the grapes growing off are the “fruit” we produce—some sources consider this to be the things we accomplish, the talents we have, our service and actions. Others deem it the “fruit” of Christian character produced in us or specific kingdom work we accomplish. The leaves (although the Bible in no way indicates this) I like to think of as our material and earthly possessions. They decorate and protect us from the elements, but are not the “point” of the vineyard. Just part of the process.

Now let’s dive in. A vineyard’s entire source of life comes from sap that flows up from the roots through the vine and out into the branches, extending to the leaves and fruit. That sap is like our body’s blood, that vital part of our makeup that carries nutrients and oxygen to all parts of our bodies. Branches can only survive by being connected to that vine, getting its sap. Therefore, the better the connection to the vine, the more sap can get through, the more life it has, the richer the fruit it produces. Make sense? More on this later.

Readers, this is so cool. I first thought that grafting, taking a branch from one plant and attaching it to another, was done purely to create hybrids. Yet one vintner told me the main reason he grafted was to perform a rescue mission. Taking a branch from a dying plant and grafting it to the trunk of a healthy one gave it a blessed chance at life, if it connected well to the new, stronger vine. That connection allowed it to tap into the resources of the healthy plant, and if that joint was strong, the branch would likely flourish and become part of that plant. It meant taking a branch he wasn’t ready to give up on and attaching it to a healthy vine so it could draw from that vine’s health and strength.

Let’s pause. We are grafted branches—it’s a fact. We all started out sickly and weak, destined for death, but being grafted to Jesus, the healthy vine, means you have life because you have HIS life running through your veins. The kind of life he offers is abundant and hearty and rich—and it’s just the beginning of what you can do together.

But you have to be together.

So how does a branch become effectively connected? Well, this is how it happened for me. In Victorian England, the vintner would make cuts on both the end of the branch and the vine that would receive it. Then he’d “score” both cuts, which basically means roughing up and making tiny slashes with sharp tools so the two pieces join together more effectively. But it needs to happen to both—branch and vine. Our initial “grafting” into God comes with humbling and repentance—and then a pretty big change of life. That’s our cutting and “scoring.” It’s painful, but that’s ok. Jesus was “scored” by Roman soldiers for our benefit and suffered immensely for the sake of the branch God wasn’t ready to give up on. He spent three decades here on earth, with all its pains and imperfections, all so the vine would be ready to receive the graft of you. Of all of us. It’s an immense gift, and one that means life for us. We become part of a new plant and suddenly have access to all the strength and life of that new vine.

But he doesn’t force us to connect.

The weak connection and survival mode

Here’s the thing about vineyard joints. A branch can look connected to the vine, solidly affixed and with a lovely foliage of leaves and grapes. But if you bent the branch, you’d feel how thin and dried out it is, how weak and breakable. It could fool a lot of people, looking firmly connected from the outside, but that poor branch is secretly dying inside. Eventually, though, everyone will be able to tell because the fruit it produces will be hard and bitter. (Do you ever produce things that are hard and bitter with your life?)

For the branch, this is a slow death. It still gets a trickle of sap and it can survive for a long time this way, even growing things, but who wants to merely survive? No vintner wants that for his vineyard. (And God certainly doesn’t want that for us.) That’s why most of the ones I talked to spend inordinate amounts of time on an effective graft.

In a vine, if there’s a loose or sloppy graft, the joint will grow over, just like a scab forms on human skin. Eventually that thick, hard scar will cut off the flow of sap to that branch. What looks like a solid connection, that thickening scar, is actually slowly killing the branch because the plant knows the connection isn’t good. It’s closing it off. Things never stay stagnant, even connections. Things are constantly growing one direction or the other—more connected or less.

Let me pause and clarify here that this is not a picture of God slowly cutting you off for not being enough, not praying enough, or making bad choice after bad choice. If that were the case, my graft to Jesus would be impossibly beyond repair. Think of it more like a gradual drifting of relationships when you become super busy, distance growing up between you and your friend like that vine bark scarring over. That connection shrinks by default as the days swim on. After some time, you realize you’ve suddenly gone from being heavily involved in that friend’s life to barely keeping up on social media, not having any clue what’s going on in the person’s heart.

The same happens between God and His people. Life gets busy and we lose sight of the “why” and the “who” or painful circumstances cloud our heart. It leads to a sense of dryness, of striving and having it all depend on you, on living in survival mode on a trickle of life.

But guess what. There’s a lot of hope for that vine. A solid connection to that rich source of life is possible. I’ll talk lots more about how and why to connect in the last section, but for now rest in the knowledge that God does not want to give up on you. Jesus allowed Himself to be cut and roughed up so He could receive you, so His strength could bleed out into your life and become yours.

More to come next week.

“I have been crucified with Christ and I no longer live, but Christ lives in me. The life I now live in the body, I live by faith in the Son of God, who loved me and gave himself for me” (Galatians 2:20).